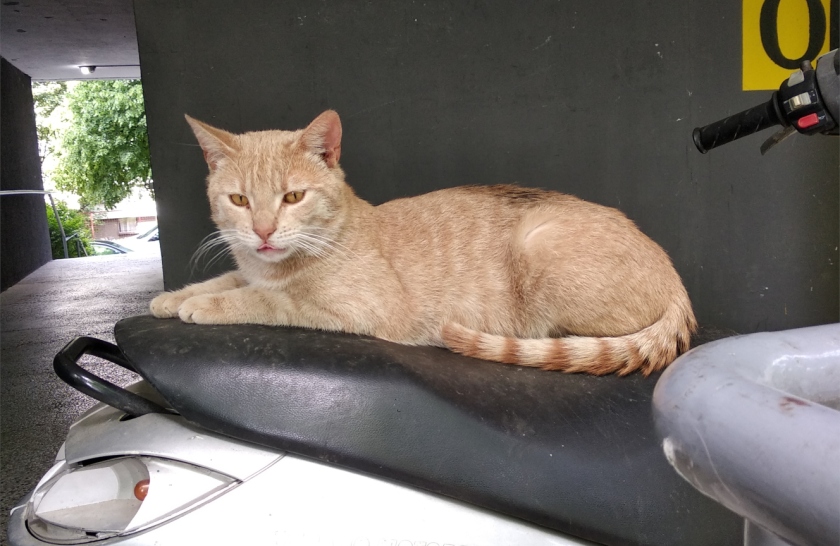 Or is it Mew News? Or Meow News?

And that’s why the current mood is:

The story I sent to a contest wasn’t chosen (which is, to be honest, what happens almost every time I send a story to a contest, so I’m used to it), so I posted it on my blog in Serbian. I know, I know, I could have tried offering it to someone else, but I’m lazy.

Currently reading: Necronomicon by H. P. Lovecraft. To be more specific, one of the local versions of Best of Lovecraft, the third edition. I’ve read those stories before (and, if you’ve ever read Lovecraft, you know what I’m reading, too), but I was inspired to grab this book after the graphic novel I had read before that.

Recently read: H. P. Lovecraft’s At The Mountains of Madness by Gou Tanabe. It’s got 4 parts, or 2, depending on the edition, and it’s great. I mean, as an adaptation, it’s pretty good; visually, it’s really, really good, and the illustrations spreading over 2 pages are brilliant.

And we’re talking about showing unimaginable horrors, among other things. And strange areas that make people feel uneasy, at best. And… Well, if you’ve read At the Mountains of Madness, you know the tone and the mood this graphic novel is meant to show…and it succeeds.

Go on and read it. Stare at it. Love it.

Currently watching: Love, Death & Robots, season 2. I’m about halfway through, and so far, Snow in the Desert is the best episode. Animation is beautiful, and the story is…well, it succeeds in telling a lot about human condition in just 15 minutes, about loneliness, about being different, about…I’m not going to spoil it for you, go on and watch it.

Overall, I’d say that the first season was better, but this one is still good, and well worth your time.

Currently working on: right now, resting, otherwise, work, when there’s any. And in the meantime, struggling with my TBR pile, but you’re probably all familiar with that. So many books, never enough time…

That’s it for now (I’ve managed not to have another belated post, yay!), see you next time!

I feel sleepy these days, most of the time. Is it the weather, or the whole pandemic thing dragging on and on, or… There could be a bunch of reasons, really.

I hope that at least the weather will stabilize at some point…though preferably not at a heat wave or something.

Of course, an end to this pandemic would also be great, but the way that way too many people behave, I doubt it’s happening soon (you won’t hear me complaining if I turn out to be wrong).

Current mood? Not in the mood. But hey, there’s another photo of that cute neighborhood biker cat up there, and that’s something, too.

After who knows how long, I’ve sent a story to a contest. Fingers crossed!

Other than that, it’s the usual: working, reading, sometimes watching something.

Currently reading: Hacker, Hoaxer, Whistleblower, Spy: The Many Faces of the Anonymous by Gabriella Coleman. I’m about halfway through, and it’s a fun read. There’s a lot I didn’t know (no surprise there), and I’m pretty certain that there will be a lot I don’t know about the Anonymous once I’m done with the book. But then again, I suppose that’s the point: with the amount of law-breaking going on (for a good reason, or for fun, or both), they have no reason to want others to know too much about them.

Also recently read: 8 books since the last post, including Charlotte’s Web by E.B. White (you all know that one, right?), Smrt u ružičastom (Death in Pink) by Đorđe Bajić (a crime/thriller), The Only Good Indians by Stephen Graham Jones (a really good horror book), Elon Musk: Tesla, SpaceX, and the Quest for a Fantastic Future by Ashlee Vance (lots of interesting information there), Kult Gula (The Cult of Ghoul) by Dejan Ognjanović (chosen texts from his blog from the last 10 years), Ravan – Podnebesje by Dušan Paučković (fantasy, sort of, plus a bunch of other things, about things happening in the afterlife), A Strange Country by Muriel Barbery (if you’re looking for something like The Elegance of the Hedgehog, this is not it), and Srneća leđa (Chocolate Loaf) by Ana Marija Grbić (wonderful short stories).

Currently watching: Wellington Paranormal. The same world as What We Do in the Shadows, and the same type of humor. It’s fun, but binge-watching it would be too much.

And that would be pretty much it. Happy holidays, if it’s Easter now in your part of the world, and if not, enjoy yourself anyway!

What can I say, I don’t feel like writing. Or doing anything.

I mean, I do write. When there’s work, or on my blog in Serbian, where I mostly write about the books (and sometimes comics) I’ve read.

But most of the time, I don’t feel like writing. Living in interesting times? The times are dull, and are just making me like people less and less.

Current mood? Look at the picture above.

I got the first dose of the AstraZeneca vaccine; the next one is 12 weeks after the first one. I’ve waited for a bit longer than 3 weeks after the first dose, and then checked the antibodies. I’ve got them, a pretty decent number, so the vaccine is doing something. My reaction to the vaccine wasn’t exactly pleasant, but it was over in a few days, and wasn’t a big deal. And after checking the antibodies, I’ve dared to visit a doctor for a check-up (everything is fine). And since I was out and about already, I got myself some books and comics.

I expected something to happen in March, but it didn’t. Oh, well, it will happen at a later time. One way or another.

Currently reading: Blindness by Jose Saramago. I’m tired of the pandemic, and I’m reading about a mysterious epidemic of blindness? Well, yes. It’s a good book. And relevant to what we’re going through (some countries more than the others). But mostly, it’s a good book. Creepy and not pleasant, but good.

Recently read: Punisher 4: Barracuda by Garth Ennis. It’s violent. Very violent. And fun. And a really nice read after seeing a bunch of people acting like stubborn rebellious idiots during a pandemic. I mean, I’m not going to shoot them or something, but getting away from them and back home, and reading Punisher episodes written by Garth Ennis feels good.

Also recently read: a bunch of books and some comics. One comic book (Le Chat du Rabbin) and 11 books in March alone, including two books by Elena Ferrante (her first and the last one), some Japanese horror stories (great), The Magus by John Fawles (weird, interesting, good), Twins Trilogy (The Notebook, The Proof, The Third Lie) by Agota Kristof (a lot more weird, and wild, and strange, and really good), Herland by Charlotte Gilman Perkins (one of the first feminist utopias, really interesting), Autonomous by Annalee Newitz (some important issues, and some strange and not exactly healthy couples), a collection of stories by Aliette de Bodard (some were really fun, like the most unusual version of Sherlock and Watson I’ve seen so far, with Watson being a mindship suffering from PTSD), The Seventh Function of Language by Laurent Binet (if you’ve enjoyed The Name of the Rose, you might like this one, too), Embassytown by China Mieville (complex, unusual, really good)… It was a good month for reading.

Currently watching: well, nothing. I’m reading. Possibly way too much. American Gods are over, they say there won’t be another season, which means they’ve left it all hanging on a tree… Hopefully there will be another season, somewhere, or a movie.

Currently working on: work, when there’s any. When not, well, I think you know what I’m doing.

That’s it for now, hopefully April News won’t be a belated one.